Last Spring while scrolling through my Facebook feed I noticed a pictorial essay of women with arms raised, their unshaven armpits displayed. Just as images of women’s bodies portrayed in all their authentic glory evoke a tribalistic pride, I felt the sense of freedom apparent in their eyes. Immediately I typed “How powerful!” and hit “enter” without a thought. I’m free, too! I began warming to the idea of not shaving my pit hair when a week before an acquaintance on the barstool next to me leaned in and whispered, “Ya know… she doesn’t shave her armpits”, as if imparting … END_OF_DOCUMENT_TOKEN_TO_BE_REPLACED

Leaving Glendalough we wound our way through the Wicklow mountains to the Hollywood Inn, where we were introduced to the Hurling Finals and learned a few Irish … END_OF_DOCUMENT_TOKEN_TO_BE_REPLACED

For the next six weeks I will be walking and practicing with my new camera in preparation for a trip to Ireland.  Walking is a bit boring really, compared to lithe runners with their snug running shorts and pretty shoes.  My jazzy shoes rival any runner’s, but that is about all the competition I can provide.  Have you seen the articles that say you can simply walk off excess weight around your middle?  Yes, I saw the headlines at the supermarket, too!  So, I will perform my own experiment, and it will not involve eating kale.  My diet is mostly natural … END_OF_DOCUMENT_TOKEN_TO_BE_REPLACED

The 37th revision of my résumé combined with a smooth and confident demeanor gleaned from a multitude of prescreening phone calls finally hooked an interview invitation.  I’m exaggerating my coolness, but if I think about how suave I’m not,  I may never have the nerve to squeak out interview answers. When I lost my job six months ago I knew the job market was competitively fierce.  I can read.  But, knowing and understanding to the depth I do now are different and worlds apart.  My belief that perseverance can overcome any obstacle was wavering and The Maker and I were having some serious discussions after six … END_OF_DOCUMENT_TOKEN_TO_BE_REPLACED 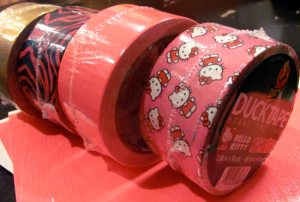 I assumed newly patterned duct tape was intended for art projects, but it seems some parents, teachers, and caregivers are using it as a time-out option.  To be perfectly clear, I do not find the act of duct taping a toddler to a wall or taping close a teenager’s constantly running mouth facetious.  It is yet another example of how any immature imbecile can have kids and prove themselves worthy of my immature name calling by posting Facebook pics of duct taped-kid handiwork.  The absurdity is what makes me laugh, just like when I watch the dumb criminals show on TV.  Teachers and daycare workers who are trained and paid to curb child behavior must have lost some of their minds to believe kids deserve to be duct taped.  I imagine all those perspectives change dramatically when the police show up to let them know in crystal-clear fashion that they do not see the humor, nor find it justifiable.  In 2011 parents received 30 to 36 months in jail for duct taping their kids and last week a daycare worker in Kentucky was charged with first degree child abuse and is facing up to ten years for taping a toddler to the floor during nap time.  Toddlers are chocked full of energy and curiosity and they lack impulse control, traits that they will also exhibit as teenagers when it’s even harder to assert one’s authority over the independent hellions.  I do not often judge other parents.  I had my turn and made hundreds of mistakes.  I defended the Mom who admitted to drinking wine the night that her baby was stolen from her home because Moms get blamed for everything.  It isn’t as if she was breast-feeding.  Wine and parenting are frequent partners, END_OF_DOCUMENT_TOKEN_TO_BE_REPLACED

This year I felt enhancements to our New Year traditions were in order.  Our ritualistic purging is commonplace; out with the old dust bunnies and unworn clothing, make room for the new year’s new dirt, new ideas, and new fashion.  2011 was anything but commonplace in the Schultz household, and I have a strong feeling that 2012 will be chocked full of more surprising, yet positive, change.  While I did not want to give up our tried and true merrymaking recipe,  I did want to add more symbolism to the mix following a more dramatic purging than in past years. Every time … END_OF_DOCUMENT_TOKEN_TO_BE_REPLACED

Xer Life
Create a free website or blog at WordPress.com.